On Saturday April 22nd, millions of people around the world will be taking to the streets and marching in the name of science. The main march will be in Washington DC, but there are 514 marches planned around the world to stand in solidarity.  I will be marching in Lancaster PA, and I will also be giving a short speech about how people need not check their brains at the door of the church or check their faith at the door of the classroom. If you have enjoyed my blogs in the past (hey look, the archives are back up!), then I would implore you to consider finding a march near you and make your voice heard. I don’t want to sound too dramatic, but science is under siege in this country. Sometime after the invention of walls, military generals realized that full on frontal attacks were too dangerous and it’s much easier to just surround the city, cut off its supply lines, isolate it from the rest of the world, and wait until they were hungry and desperate enough to meet you on the battlefield. The Trojan War took a decade of slow emaciation before it came to the exciting bits with gods and heroes and whatnot. Likewise, the attack against science has been a slow but steady one. Despite a nearly universal recognition by climate scientists that we are causing global, catastrophic, and possibly apocalyptic climate change, it’s somehow still up for debate by policy makers. Our public education system is a mess because its policies (testing over learning) are created by administrators who ignore very clear data to the contrary. With the massive proposed cuts to several agencies (NIH, EPA, NOAA, etc), we who believe that truth is important are becoming increasingly terrified about our future. To that end, the following is my love letter to science and the reason why I am marching…

When I was a kid, I was scared of spiders because of course I was. My wife always says that you can’t trust anything with more than four legs and my wife is always right. I was also a scientist when I was a kid, and I knew that the best way to get over a fear was to understand it, and the best way to understand something was through science. Can you tell that I watched a lot of Bill Nye the Science Guy?

OK, so step 1: make observations. Done. That one is easy. Spiders are the worst. I mean, why do they even need all those eyes? What are they planning…

Step 2: Ask questions. For a kid, this one is also easy. How many different kinds of spiders live in my house/yard, which ones are the scariest, how dangerous are they, how fast are they, and can they open doors?

Step 3: Create a hypothesis to answer the questions. This one was also easy for me because the more I observed them, the more I realized that they were horrifying, soulless murder machines from the pits of Hell.

Now, step 4: Test your hypothesis. To this end, I created a spider Colosseum which was really just a glass apple juice jar, but imagining it as a gladiatorial arena is much more dramatic. I caught every kind of spider I could find and put them into this jar. Little ones, big ones, jumpy ones, lazy ones, and even a Daddy Long Legger even though it’s not technically a spider. If they are truly the architects of Armageddon, then surely they will show their true colors when confronted by other Hellspawn.

Step 5: Analyze the data. OK, so there wasn’t a whole lot of actual violence in my glass arena. I tapped the glass. Nothing. I shook them up to get them angry. Nothing. Some of them lazily climbed around. Others just sat there like surly teenagers. The Daddy Long Legger just walked on everyone’s heads but no one seemed to care. With my hypothesis in doubt, I returned to step 4 and changed my experiment.

Step 4 (part 2): Maybe they were just being nice to each other now but wait until there is food to fight over. Then the venom will come out! So I turned over a rock and grabbed a pill bug, a beetle, and a worm to throw in the jar. Here comes the fight… 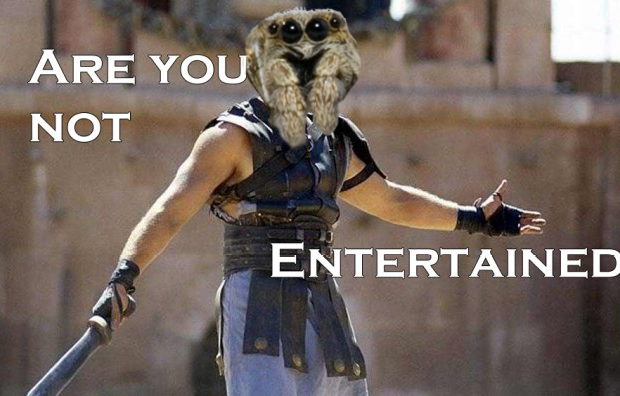 Nothing. No pouncing, no murdering, no scary external digestion. Nothing. Just boring bugs walking around bumping into each other like zombies in a hall of mirrors.

Well, at this point, it was looking like my hypothesis was shot, so I went back to the drawing board. Maybe spiders aren’t inherently evil. Maybe they are just weird looking creatures that only hunt when they are hungry and only attack when they are scared.

New experiment! I found one of those webs in the bush with the funnel in it and threw a firefly into the web. The spider stayed in his little funnel, watching the glowing bug struggle and then give into its fate. Nothing. No attack. So I left and came back every hour or so until I noticed that the firefly was wrapped in a silk cocoon, probably marinating in whatever blend of herbs and spices that spiders are into.

So that was it. Spiders are creepy looking, but despite what John Goodman in Arachnophobia would have you believe, they hold no malice towards me. Armed with this new knowledge, I caught the biggest, baddest spider in my yard (a massive yellow garden spider) and kept it in a small terrarium as a pet. In time, I began to notice how incredibly skilled it was in architecture and how patient it was, sitting still for hours on end. It was essentially a many-legged monk. A monk who could also fight when it needed to. It was basically the Iron Fist without all of the subtle racism. I was so enamored with spiders after this that I wrote an essay for a Discovery Channel contest about spiders when I was 11 years old and came in second place. First prize was having a new species of spider named after you and an all-expense paid trip to the Amazon to meet the scientists who discovered it. Runner up won a t-shirt.

So at least I got that.

The moral of this spider-story is that the scientific method helped me to overcome my fears and prejudices and grow as a person. Science is not just a collection of facts and figures to memorize, it is a mindset, a way of life. Science gets in your veins. Science is a set of tools that helps you to make sense of the universe. The basic, underlying assumption of science is that the reality that we can measure is ultimately knowable. So we come up with educated guesses, test those guesses, and when our guesses can accurately predict the future, we call that a theory. A theory is only as good as its effectiveness, and is designed to be changed. The scientific method is humble and assumes that new information can change old models. I remember reading how disappointed Stephen Wolfram was when the physicists at CERN confirmed the existence of the Higgs Boson back in 2012. He was happy that the final puzzle piece of the Standard Model had fit their predictions so well, but without a loose thread to pull, there was nothing left to do, no question to follow, no far-off light to chase. Scientists want to be proven wrong so that they can eventually get it right.

That’s what we in the religious community need to internalize, because we have the opposite mindset. Many of us believe that we have the full revelation of God, and any challenge to our beliefs is an attack on truth itself. So we dig our heels in and fight back instead of examining this new data and reevaluating our belief system.

If you are not willing to be wrong, then you will never be right.

We in the United Church of Christ like to say that “God is still speaking” and a still-speaking God has a lot to say about our doctrinal arrogance. I think that God has a lot to say to policy makers too. We’re so swept up in our nationalistic narrative, that we are blind to facts. The data says that the US is not the #1 country in the world. Well, unless you’re talking about the number of prisoners per capita, military spending, or olympic gold medals for swimming. We are not the greatest nation on the Earth in terms of overall happiness (Norway), income (Switzerland), health (Qatar), or education (Singapore), and we will never be the best if we deny the data. So instead of creating a comfortable lie that everything is the best, we need to adopt the mindset of a scientist, allow the data to inform our opinions, and then work to solve them in ways that make sense.

So as I march for science in a few weeks, I am not just marching for a single discipline. I am not marching so that the facts can be more widely known or that our planet can be saved from global warming. I’m marching to help spread a worldview that is grounded in humility and is always striving for truth. After the bombings of Hiroshima and Nagasaki, Albert Einstein said, “The release of atomic power has changed everything except our way of thinking … the solution to this problem lies in the heart of mankind. If only I had known, I should have become a watchmaker”. We need a new model of thinking that does not rely on the dogmatic certainty of our tribal ancestors. We can’t afford to continue our petty fights when we hold the power to destroy all human life in so many creative ways. So would you stand with me and plead to our representatives to respect truth, acknowledge the power of science, and above all else, adopt a spirit of humility?